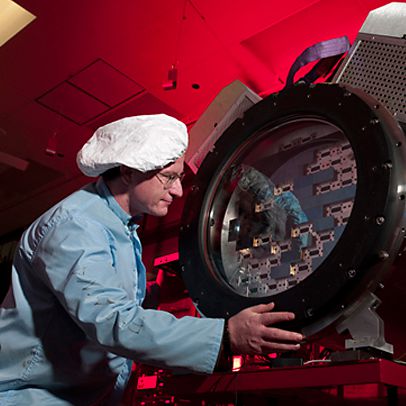 Universities Research Association, Inc., (URA), is a consortium of over 90 leading research-oriented universities, primarily in the United States, and also in Italy, Japan, and the United Kingdom.

The mission of the URA is to establish and operate in the national interest unique laboratories and facilities for research, development, and education in the physical and biological sciences to expand the frontiers of knowledge, foster innovation, and promote the education of future generations of scientists.

At the behest of President Lyndon B. Johnson’s Science and Advisory Committee and the National Academy of Sciences, the not-for-profit 501(c)(3) URA Corporation was founded in 1965 for management and operation of research facilities in the national interest. URA’s charter directs the organization “…to acquire, plan, construct, and operate machines, laboratories and other facilities, under contract with the Government of the United States or otherwise, for research, development, and education in the physical and biological sciences…and to educate and train technical, research and student personnel in said sciences.”

From 1967 to 2006, URA was the prime contractor to the Department of Energy for the creation and operation of Fermi National Accelerator Laboratory near Batavia, Illinois. In 2007, URA partnered with the University of Chicago to form Fermi Research Alliance, LLC, which now holds the Fermilab contract.

Fermilab was home to the Tevatron which, from 1983 until the initiation of the Large Hadron Collider (LHC) at the CERN facility outside of Geneva, Switzerland, was the world’s highest-energy accelerator for elementary particle physics research. Fermilab was a full partner in the construction of the LHC, which in 2012 announced the discovery of the long-sought Higgs Boson, hinted at in final Tevatron data. Today the LHC Remote Operations Center at Fermilab keeps US scientists and technicians closely connected to activities at the LHC and Fermilab continues to participate in the upgrade of the LHC’s capabilities.

Since the shutdown of the Tevatron in 2011, experiments using particle beams produced in Fermilab’s accelerators continue to explore the fundamental nature of matter, energy, space and time, and their relationships in the physical universe.

Fermilab’s strategic vision going forward is establishing itself as the world center for neutrino research with the Long Baseline Neutrino Facility, located at Fermilab and at the Sanford Underground Research Laboratory in Lead, South Dakota, serving as the first major US-hosted international facility of its kind, under the aegis of an international collaboration.

Fermilab also remains the premier facility for accelerator research and development, as well as a major center for research in particle astrophysics and related astronomical sciences, having played lead roles in the Sloan Digital Sky Survey, the Pierre Auger Cosmic Ray Observatory Project, the Cryogenic Dark Matter Search at the Soudan Underground Laboratory in Minnesota, and the more recent Dark Energy Survey in Chile.

On behalf of the U.S. participants in a collaboration of scientists from some 17 countries, in 1999 URA received funding from the Department of Energy and the National Science Foundation for the U.S. share of the $50 million Southern Hemisphere Array of the Pierre Auger Cosmic Ray Observatory in Argentina. Initiated under the leadership in the U.S. of Nobel Laureate James Cronin, the Auger Observatory has probed the mysterious origins and nature of cosmic rays in an energy regime a million times greater than any accelerator has produced to date. In 2009 Science Magazine singled out Pierre Auger’s correlation of the arrival directions of the highest-energy cosmic rays with nearby galaxies containing active black holes at their centers as one of the most important scientific breakthroughs of the year.