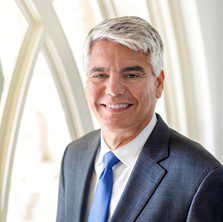 With a 36-year career in higher education, Fenves has experience at top-tier research universities as a renowned academic researcher and professor as well as an executive leader.

Before arriving at Emory in August 2020, Fenves was president of The University of Texas (UT) at Austin from 2015 to 2020. Under his leadership, the university recruited world-class faculty, broadened cross-disciplinary research, raised four-year graduation rates to record levels, built the Dell Medical School, and significantly increased extramural research funding. As president of one of the largest doctoral-granting universities in the nation, Fenves also elevated graduate education and increased support for graduate students. Prior to becoming president of UT, he was provost of the university and dean of the Cockrell School of Engineering.

Fenves was a faculty member at the University of California at Berkeley (UC Berkeley) for 20 years and served as chair of its No. 1–ranked Department of Civil and Environmental Engineering.

For his groundbreaking research in earthquake engineering and academic leadership, Fenves was elected in 2014 to the National Academy of Engineering, the highest recognition for an engineer in the United States. He earned his undergraduate degree at Cornell University and graduate degrees at UC Berkeley.