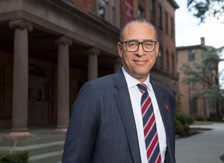 Jonathan Holloway, a U.S. historian, took office as the 21st president of Rutgers, The State University of New Jersey, on July 1, 2020. He also serves as a University Professor and Distinguished Professor.

As Northwestern University’s chief academic officer, Dr. Holloway supervised the university’s educational policies and academic priorities, oversaw the preparation of the university’s annual budget, acted on faculty appointments and promotions, and directed the allocation of resources and space to academic units.

A prolific scholar, speaker, and author of numerous books and publications, President Holloway’s scholarly work specializes in post-emancipation U.S. history with a focus on social and intellectual history.

Dr. Holloway is the recipient of numerous awards and honors. Dr. Holloway is an elected member of the American Academy of Arts and Sciences and the Society of American Historians.  His board appointments include the Andrew W. Mellon Foundation and the Academic Leadership Institute. He previously served on the Executive Committee of the Organization of American Historians and the boards of the Chicago Botanic Garden, Illinois Humanities, the National Humanities Alliance, and the Society for United States Intellectual History. In April 2020, New Jersey Governor Phil Murphy appointed him to the Governor’s Restart and Recovery Commission, and in May 2020, New Jersey Assembly Speaker Craig Coughlin appointed him to his Economic Advisory Council.

Dr. Holloway began his academic work at the University of California, San Diego, received a bachelor’s degree with honors in American studies from Stanford University and M.A. and Ph.D. degrees in history from Yale University.