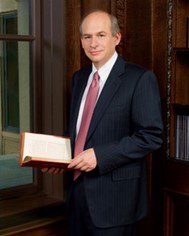 Prior to taking the helm at Rice, Leebron was dean of Columbia Law School. A native of Philadelphia, he is a graduate of Harvard College and Harvard Law School, where he was elected president of the Law Review in his second year. After graduating in 1979, he served as a law clerk for Judge Shirley Hufstedler on the 9th Circuit Court of Appeals in Los Angeles. He began teaching at the UCLA School of Law in 1980 and at the NYU School of Law in 1983.

In 1989, Leebron joined the faculty of Columbia Law School, and in 1996 he was appointed dean and the Lucy G. Moses Professor of Law. Leebron also served as a visiting fellow at the Max Planck Institute for Comparative and International Private Law in Hamburg, Germany, and as the Jean Monnet Visiting Professor of Law at Bielefeld University. He is currently part of the political science faculty at Rice and has authored a textbook on international human rights.

In 2006, Leebron was awarded France’s Commandeur de l’Ordre national du Mérite, and the Encomienda de la Orden de Isabel La Catolica by the government of Spain. In 2008, he received an honorary doctorate from Nankai University. In 2010, Leebron and his wife, University Representative Y. Ping Sun, were selected by the Greater Houston Partnership as the city’s International Executives of the Year for helping make Houston a center of international business.