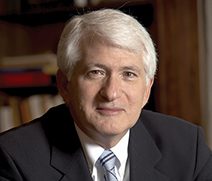 As UCLA’s chief executive officer, Gene Block oversees all aspects of the campus’ three-part mission of education, research and service.

Among the prestigious honors Chancellor Block has received are the Los Angeles NAACP Foundation President’s Award and The Friends of the UCLA Semel Institute for Neuroscience and Human Behavior Visionary Award. He also holds an honorary professorship at Zhejiang University in China.

Dr. Block became chancellor of UCLA on August 1, 2007. Previously, he served as vice president and provost of the University of Virginia, where he held the Alumni Council Thomas Jefferson Professorship in Biology and directed the National Science Foundation’s Science and Technology Center for Biological Timing. He also headed an NIH graduate training program aimed at increasing the number of scientists from underrepresented groups.

A native of Monticello, New York, Chancellor Block holds a bachelor’s degree in psychology from Stanford University and a master’s and Ph.D. in psychology from the University of Oregon. He completed a postdoctoral fellowship at Stanford, studying with Colin Pittendrigh, “the father of biological timing,” and Donald Kennedy, who later served as president of Stanford.