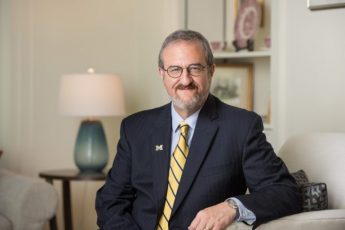 Dr. Mark S. Schlissel is the 14th president of the University of Michigan and the first physician-scientist to lead the institution, appointed in 2014.
A graduate of Princeton University (A.B., summa cum laude, 1979, Biochemical Sciences), he earned both M.D. and Ph.D. degrees at the Johns Hopkins University School of Medicine (1986, Physiological Chemistry). He completed residency training in internal medicine at Hopkins Hospital and conducted postdoctoral research as a Bristol-Myers Cancer Research Fellow under David Baltimore at the Massachusetts Institute of Technology’s Whitehead Institute. President Schlissel is a board certified internist.
President Schlissel previously was provost of Brown University and began his career as a faculty member in 1991 at the Johns Hopkins University School of Medicine, where he earned a number of awards and fellowships for his research and teaching. He moved to the Department of Molecular and Cell Biology at the University of California-Berkeley in 1999 as associate professor, then professor and served as the departments vice chair from 2002 to 2007.
He was UC-Berkeley’s dean of biological sciences in the College of Letters & Science beginning in 2008 and held the C.H. Li Chair in Biochemistry until his appointment as Brown’s provost in 2011.
His research has focused on the developmental biology of B lymphocytes, the cell type in the immune system that secretes antibodies. He is the author or coauthor of more than 100 scientific papers and has trained 21 successful doctoral candidates in his lab.
Nationally, he has served as member and chair of the Immunobiology Study Section at the National Institutes of Health and on the Howard Hughes Medical Institute’s Scientific Review Board. President Schlissel was elected to the American Society of Clinical Investigators in 1998 and the American Association of Physicians in 2013.
He has been a member of the American Association of Immunologists since 1992. He was elected as a Fellow of the American Association for the Advancement of Science in 2013 and as Fellow of the American Academy of Arts & Sciences in 2015. He has helped organize major international scientific meetings and is a frequent seminar speaker at universities through the United States.