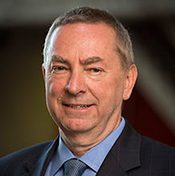 Dr. Nigel Lockyer began his tenure as director of Fermi National Accelerator Laboratory, on September 3, 2013. Before his arrival at Fermilab, Dr. Lockyer was director of TRIUMF, Canada’s national laboratory for particle and nuclear physics. He was also a professor of physics and astronomy at the University of British Columbia.

Prior to leading TRIUMF, Lockyer was a professor of physics at the University of Pennsylvania. His research focused on high-energy particle experiments at the energy frontier, with an interest in testing fundamental symmetries and studying the heaviest quarks.

He has served at Fermilab in a variety of capacities dating back more than 25 years. Lockyer performed research for many years at the Collider Detector at Fermilab (CDF) experiment at the laboratory’s Tevatron particle accelerator, serving as the experiment’s co-spokesperson from 2002 through 2004. CDF achieved world acclaim for discovering and studying the top quark, one of the fundamental building blocks of nature. Dr. Lockyer was a Fermilab guest scientist from 2001 to 2005 and a visiting scientist during the summers of 1987 and 1988.

He is a Fellow of the American Physical Society and a recipient of the society’s 2006 Panofsky Prize for his leading research on the bottom quark. Dr. Lockyer earned a B.S. in physics from York University in Toronto and his Ph.D. in physics from The Ohio State University.