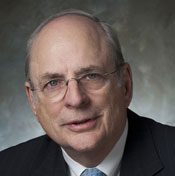 Norman Augustine has a long and distinguished career as a corporate leader, public servant, educator, and author. In addition to serving on the URA Board of Trustees, he currently serves as a member of the President’s Council of Advisors on Science and Technology and the Department of Homeland Security’s Advisory Council. He is the retired chairman of chief executive officer of the Lockheed Martin Corporation.

Among Augustine’s many honors are the National Medal of Technology and the Department of Defense’s highest civilian award, the Distinguished Service Medal, given to him five times. Most recently, he was awarded the 2005 AAAS Philip Hauge Abelson Prize and the 2006 Public Welfare Medal from the National Academy of Science. He is co-author of The Defense Revolution and Shakespeare In Charge and author of Augustine’s Laws and Augustine’s Travels. He holds 21 honorary degrees.