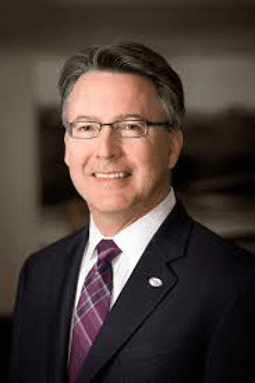 Timothy D. Sands is the 16th president of Virginia Polytechnic Institute and State University, joining the university in June of 2014. In collaboration with the provost and academic leadership, President Sands has initiated foundational projects across the university to align Virginia Tech’s trajectory with the Beyond Boundaries vision. His initiatives have included the Virginia Tech Carilion rapidly developing Academic Health Center in Roanoke. In December, 2018, President Sands announced the creation of a one million square foot Innovation Campus in Northern Virginia to support the commonwealth’s economy with leading programs in computer science, software engineering, machine learning and artificial intelligence. The Innovation Campus was the centerpiece of the education proposal that was a critical factor in Amazon’s decision to locate a new east coast headquarters in Arlington, VA.

Before coming to Virginia Tech, President Sands was executive vice president for academic affairs and provost of Purdue University in West Lafayette, Indiana. He was acting president in the summer and fall of 2012, before Mitchell E. Daniels became the 12th president of Purdue.

He joined the Purdue faculty in 2002. Prior to becoming provost, he served as the Mary Jo and Robert L. Kirk Director of the Birck Nanotechnology Center in Purdue’s Discovery Park. From 1993 to 2002, President Sands was a professor of materials science and engineering at the University of California, Berkeley, and earlier performed and directed research groups at Bell Communications Research (Bellcore) in Red Bank, New Jersey.
He has published more than 250 refereed papers and conference proceedings and has been granted 20 patents in electronic and optoelectronic materials and devices. His recent research efforts have been directed toward the design and development of novel nanocomposite materials for environmentally friendly and cost-effective solid-state lighting, direct conversion of heat to electrical power and thermoelectric refrigeration. He is a fellow of the Institute of Electrical and Electronics Engineers, the Materials Research Society, and the National Academy of Inventors, and a member of the Economic Club of Washington, D.C.

He earned a bachelor’s degree with highest honors in engineering physics and a master’s degree and doctorate in materials science from the University of California, Berkeley.