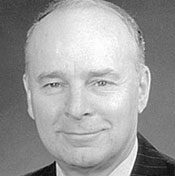 Dr. William H. Joyce serves as Vice Chair of the URA Board of Trustees. He is also the Chairman and CEO of Advanced Fusion Systems, and the retired former chairman of the board and chief executive officer of Nalco Company, the leading provider of integrated water treatment and process improvement services, chemicals, and equipment programs for industrial and institutional applications. He served in those roles at Nalco from 2003 to the end of 2007.

An active member of scientific bodies and panels, Dr. Joyce has received numerous awards and honors. He was awarded the National Medal of Technology from President Clinton in 1993. Other accolades include the Perkin Medal from the Society of Chemical Industry and the Outstanding Achievement Award and Lifetime Award from the Society of Plastic Engineers. In 2008, William was selected as one of the 100 most successful engineers of the century by the American Institute of Chemical Engineers.

Dr. Joyce received a BS in chemical engineering from Penn State University, and an MBA with distinction and a PhD in business, both from New York University.