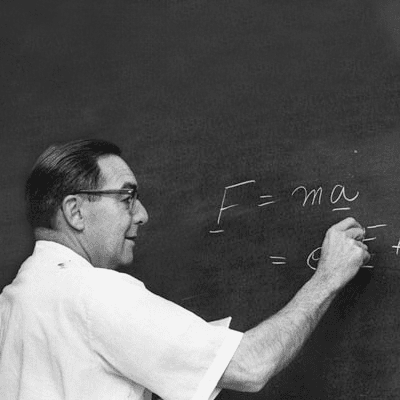 The laboratory was founded in 1967 as the National Accelerator Laboratory and was renamed in honor of Enrico Fermi, the renowned physicist, in 1974. The laboratory’s first director was Robert Rathbun Wilson, under whom the laboratory opened ahead of time and under budget. He is the namesake of the site’s iconic laboratory building, whose unique shape has become the symbol for Fermilab and which is the center of activity on the campus.

In 1978, Leon M. Lederman became director; under his guidance, the original accelerator was replaced with the Tevatron, an accelerator capable of colliding a proton and an antiproton at a combined energy of 1.96 TeV. Lederman stepped down in 1989 and remains Director Emeritus. The science education center at the site was named in his honor.

From 1967 through 2006, URA constructed, managed and operated the Fermi National Accelerator Laboratory under contracts with DOE and its predecessor agencies, the Atomic Energy Commission and the Energy Research and Development Administration. In 2007, URA partnered with the University of Chicago to form Fermi Research Alliance, LLC, which now holds the Fermilab contract.

A detailed history of Fermilab is available here.

In 1995, on behalf of the U.S. participants in a collaboration of scientists from 17 countries, URA received funding from the Department of Energy and the National Science Foundation for the U.S. share of the $50 million Southern Hemisphere Array of the Pierre Auger Cosmic Ray Observatory. Under the leadership in the U.S. of Nobel Laureate James Cronin, and Alan Watson, the Auger Observatory was designed to probe the mysterious origins and nature of cosmic rays in an energy regime 100 million times greater than any accelerator has produced.

This major undertaking involved the construction of a Rhode Island-size detector array. The Southern Array, located in Mendoza Province in Argentina, was completed in 2008. It is proposed to be followed by a larger, 8,000 square-mile Northern Hemisphere Array to be located in Colorado.

The Pierre Auger collaboration published its first physics results in the fall of 2007, which revealed that the arrival directions of the highest-energy cosmic rays appear to correlate with nearby galaxies that contain active black holes at their centers. Several science organizations selected this remarkable result as one of the most important scientific breakthroughs of the year.

A timeline of the development of the Pierre Auger Observatory is available here.