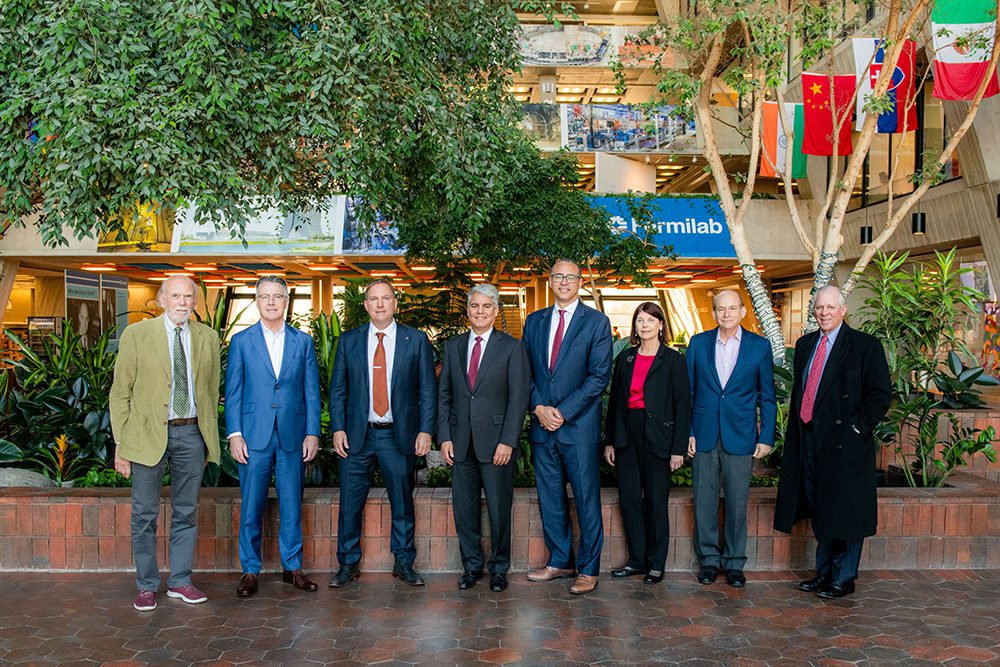 URA Board of Trustees and staff tour Fermilab

Batavia, Ill — URA Trustees and staff tour Fermilab as part of the fall Board of Trustees meeting on October 26, 2022.

Trustees and URA staff were escorted around the 6,800-acre site visiting the Short Base-line Neutrino Detector, the Accelerator Test Facility and the Superconducting Quantum Materials and System Center (SQMS).

“The members of the URA Board of Trustees have a keen interest in understanding and supporting the ground-breaking science experiments hosted at Fermilab.  Experiencing these three projects firsthand provides invaluable insight into the complexity of the challenges facing Fermilab and into the amazing ingenuity of the scientists who are meeting those challenges,” said John Mester, President and CEO of the Universities Research Association.

The Short Base-line Neutrino Detector is one of three detectors that make up Fermilab’s Short-Baseline Neutrino Program. The Detector, a 112-ton active liquid argon time projection chamber, is located 110 meters from the Booster Neutrino Beam and will record particle oscillations from electron neutrinos to muon neutrinos near the beam source. About 250 scientists from over 50 research institutions across the U.S. and the world collaborate on the Program to uncover the mysteries  behind neutrinos, one of the most abundant particles in the universe. The Detector is a pathfinder for other leading neutrino projects like the Deep Underground Neutrino Experiment (DUNE). Construction of the Detector is underway, and operation is anticipated to begin early in 2023.

The PIP-II Accelerator Test Facility is dedicated to the research and development of DUNE’s PIP-ll superconducting particle accelerator. PIP-ll is the first accelerator project with major international collaboration from countries including France, India, Italy, Poland and the United Kingdom. This essential accelerator upgrade will enable the world’s most powerful high-energy neutrino beam that will drive the DUNE experiment.  The new accelerator is expected to start operations later this decade.

The Superconducting Quantum Material and System Center (SQMS) at Fermilab is advancing quantum science and technology by building a state-of-the-art quantum computer. The project aims to optimize the amount of time quantum computers can process information by increasing the coherence time of a qubit. These discoveries may help the scientific community to better understand dark matter and expand our knowledge of the subatomic universe. SQMS is hosted at Fermilab and is comprised of some 20 partners including eleven leading research universities across the U.S. and Italy.

“URA will continue to champion the collaborative research efforts at Fermilab and work to engage our members in the work at Fermilab through programs such as the URA Visiting Scholars Program which funds scientists at our member universities to contribute to the science at Fermilab,” Mester said.